Care for a Paulownia plantation

If the Paulownia is planted for value timber production, some nurturing recommendations should be considered to achieve optimum planting success. 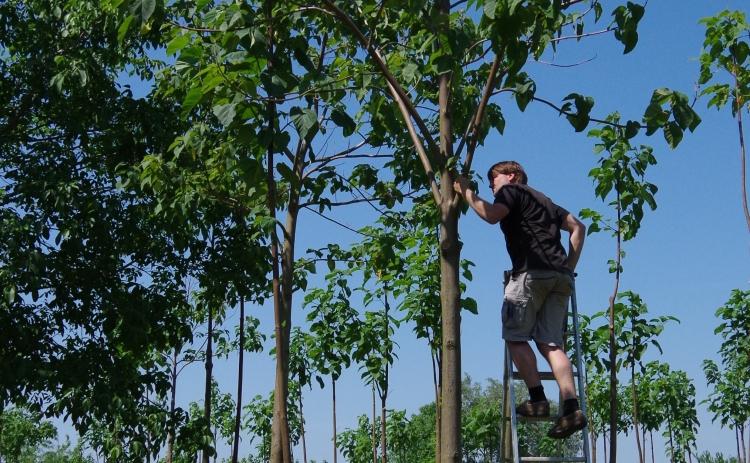 1. Cutting back the paulownia drive after the first year

Paulownia has the characteristic to put the majority of its growth resources in expanding its root system in the year of planting. The development of the main stem is neglected relatively to the potential of the plant. The physiology of the main trunk is decisively critical for the obtaining of maximal growth and the formation of high-quality timber. With the main stem of the first year, these two objectives cannot be achieved at the same time. For the optimal development of the plant, it is advisable to prune the Paulownia stems in the second year. In the first year the plant has to establish their roots at first. The stem is not as thick and sturdy as the regrowing plant after a cut back. Especially according to the value of timber production, this should be kept in mind.

Therefore Paulownias can be completely cut back up to the surface before the second growth year. With the start of the new growing season the stem starts a new drive directly from the rootstock, which quickly exceeds the old one in thickness and plant height. It is able to carry enough water and nutrients for the growth potential of Paulownia to be fully exploited through its larger diameter. Normally, this stem reaches a height of about 3-4 m, which is characterized by a perfectly straight growth and the lack of branches and thus secures the formation of valuable timber in its trunk portion. Even if the Paulownias should have formed a very respectable growth in the first year, the down cutting is recommended. Trunk errors and growth reductions due to a not conducted cutting can only be detected at a time when their correction is associated with significant losses and financial costs generally.

Even in regions with relatively mild winters, 10-15 cm of the shoot freezes usually. The reason for this is that the Paulownia is unable to lignify its young tissue sufficiently until the end of the growing season  due to its physiology.
With the growing tip it also freezes the so-called terminal bud, which can grow vertically upwards. With the beginning of the new spring, propel lateral buds from below of the back of the frozen stock grow apart. Paulownia has a dipodial growth, i.e. there are always two side buds on either side of the stem. Both buds would now grow uniformly and grow as side branches further into the air, causing the main trunk to not to be further extended in height. This growing pattern reminiscents of a fork.
To produce high quality timber, a trunk as long and straight as possible is desired. Similar to the pruning of shoots from the planting year, the frozen shoot tip must be cut back in spring and one of the two new side shoots will be removed. The Paulownia will now concentrate  its vigor to focus on the remaining stem, which is characterized  as generally vertically and it vigorously continues to grow, thus prolonging the trunk in height. These conservation measures are to be performed as long as necessary until the desired stem height is achieved. Typically, this is necessary for the second and in some cases after the third year.

Especially in their youth phase Paulownia is a very competitive and weak plant. Therefore it must be ensured that no competing vegetation is around the plant especially during the first 2-3 years on the growth.

4. Branches and side shoots

Paulownia scores highest revenue as value timber only as consistently branch free wood. Ingrown branches, even if they are very deep, represent a quality defect, which could lead to significant price reductions. Free of branches means: it can be best achieved by removing of the side buds above the leaves already on still green shoot. When the lateral buds removed at this early stage, you leave value-decreasing marks in the wood. In addition, the removal of these young shoots is connected with significantly less labor and therefore it is more cost effective than pruning.

If the Paulownia is planted for value timber production, some nurturing recommendations should be considered to achieve optimum planting success ...